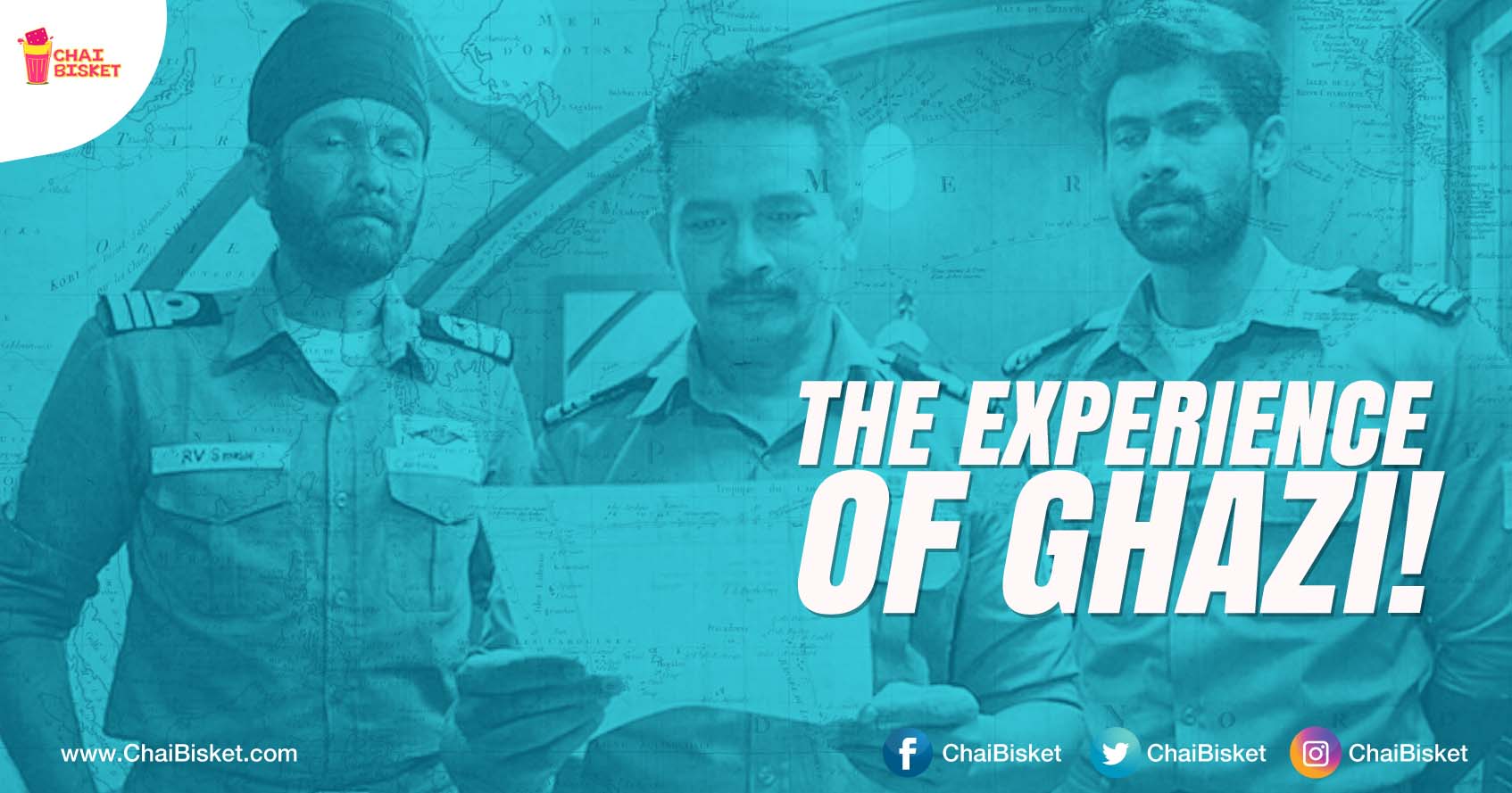 After a couple of unsuccessful attempts to get tickets for Ghazi, I finally watched it last night in a packed house. Before watching the film, all I knew about this film was that it was a war at sea film with Rana in the lead. A war film is bound to evoke patriotism. But once I stepped out after watching the film, I couldn’t get out of the emotions that I went through. It was not just patriotism; it was more about how different a theatrical experience could be. So, here’s a little analysis of the movie along with my experience (sans the patriotic moments coz they are too emotional).

1. The Setting
Most of the movie is obviously set under the sea and in a submarine. So, the color grading of the movie is quite dark. And in a theatre, when the screen shows you a dark atmosphere for most of the time, you feel like you are sitting in the dark corner of the same room. In other words, it makes the viewer engrossed in the happenings of the movie. And the classified mission raised the interest from the very beginning of the movie.

2. Team work
The team of S21 is no different from any other real life team. No team is perfect from day one. Every team has members from different backgrounds. So, it takes time for the team to settle down, iron out their differences and then work towards a common goal, by making the most of every team member’s potential. In an armed forces context, you would expect everyone to strictly follow a rule book, giving lesser space for fallouts. Once the pace of the movie sets in, we get to know that the members of S21 are from different cultures and states, and have varied experiences and beliefs.

So, the rule book itself is viewed from different perspectives. Once these perspectives converge, everyone starts talking a common language. In fact, this has been beautifully captured by a simple dialog from Captain Ranvijay Singh (Kay Kay Menon), which works out in a hilarious manner. At this juncture, I couldn’t resist from thinking about the dialog writer, Gunnam Gangaraju (the creator of the sitcom Amrutham). He has shown his prowess at creating humour in the most unexpected situations.

3. The Audience is not lame
Now, the mission in the movie is so engaging that you tend to start thinking along with the team of S21. When Lt. Commander Arjun Varma (Rana) stares at Ananya (Tapsee), and within few seconds the crew starts singing “Saare Jahaan Se Acha”, the director wants the viewer to think why they are doing that. It’s not a movie where a hero can make ten goons fly in the air with a single blow and the viewers have no option but to accept it.

When the team of Ghazi begins to make a plan, the viewers were gasping, as they understand what this could mean to S21 inspite of the naval language. Now, the naval language was also simplified for viewers. The working of a SONAR or even Periscope is 9th standard Physics. The geometry used, the time and distances calculated, everything was so well presented that felt very much within the ambit of realistic motion unlike our commercial movies which defy every law that the poor Newton had invented.

4. Strategies and counter-strategies
Strategies are the most exciting part in any war film. But in a war at sea, it gets even more challenging because you cannot see your enemy under water. You need to predict the position of the enemy (along with the error margins), strategize, anticipate the next step and be ready for the next move. If it still sounds simple, let me give you an analogy. Imagine you are locked in a room, you are given some information, protractors and triangle rulers to solve a geometry problem and you are told that you will be allowed to leave the room for solving it within ten minutes. Does it sound easy?

Then, look at this. What if the information was not accurate, what if it was not getting out of the room but it is your life and your country that you would be securing by solving the question? And most importantly, what if the time limit is not ten minutes but your life could end within the next few seconds? In such a situation, would you act by the rule books or would you act by your instinct? Every such question was beautifully answered in the film with good strategies.

5. Thrilling narration
It is not every day that you come across a film where the characters are so engrossing that you want every move of theirs to win. With Ghazi, Kay Kay Menon made his debut in Telugu films. When the entire crowd is cheering for this new face, you realize how deeply the director could make us connect with the characters of the film. And at every instance of a torpedo miss, the audience had a huge sigh of relief, something like the sound you would hear in a cricket stadium when the catch of a promising batsman is dropped. The cheers, the claps and the whistles for such an offbeat film in the single screen theatre of a small city (that I watched), shows the universality of the narration.

6. Characters
The film is a story about characters rather than just a hero, a heroine and a villain. All the characters were enacted so well that you cannot afford to forget any of them. Kay Kay Menon, as Captain Rannvijay Singh is too powerful and leaves a long lasting impression. In a contrast to his character in the classic Sarkar (where he gushes out his anger at the first instance), here his anger, grief and sarcasm are contained within his eyes. Lt. Commander Arjun Varma (Rana), just like the mythological character Arjuna (or even like Rana’s first character – CM Arjun Prasad), has an undying focus on the enemy, respects the rules (call it Dharma), strategizes and leads the team from the front.

Executive Officer Devraj (Atul Kulkarni) serves as a malleable bond that helps in balancing the right emotions of the entire team. His choice between professional and personal priorities, between what’s right and what’s told to be right is a delight to watch. Satyadev’s (as the Sonar Operator Rajeev Thakur) voice modulation was tremendous as the viewers get to understand the urgency of the situation, the success and the failure of the moves, only through his voice. Dr. Ananya (Tapsee), Battery Operator Kamalakar Shinde (Ravi Varma), Sanjay (Bharath Reddy) and Radio Operator Nilesh Mishra (Priyadarshi) raise to the occasion to play their part in the team.

7. Crew
If a movie is being praised for the music when it has no songs at all, you know that the music director has given his best. K’s music and Madhi’s cinematography were the highlights of the film. As usual, Gunnam Gangaraju did a laudable job in the dialog and screenplay departments. The art, editing and CG departments were decent. Director Sankalp Reddy deserves all the praise for bringing out a memorable film despite all the odds that he faced. Rana and PVP should be appreciated for supporting Sankalp’s vision and making it a film which would otherwise have ended up as a documentary.

8. Respect for Navy
I vividly remember in the events that unfolded post 26/11, the national media slammed our navy for the incident. It was a rare incident in our history, where the terrorists disguised and used an Indian fishermen boat to enter Mumbai. (A detailed account can be seen in the movie The Attacks of 26/11.) None of the TRP savvy channels bothered to cover the efforts of our naval force in securing the vast coastline of the country. It is only films like Ghazi that show how the navy responds to civilians and enemies, and we, the viewers end up having enormous respect for the navy.

As I walked out of the theatre, I felt so contended that all this happened in a Telugu film. Amidst the numerous emotions I had, I also felt a void when I realized that this was the last time I would be seeing Om Puri on the big screen. Wherever he is, he would be so happy for having been a part of Ghazi – a film which stands as a proud reflection of the changing times in Telugu films. 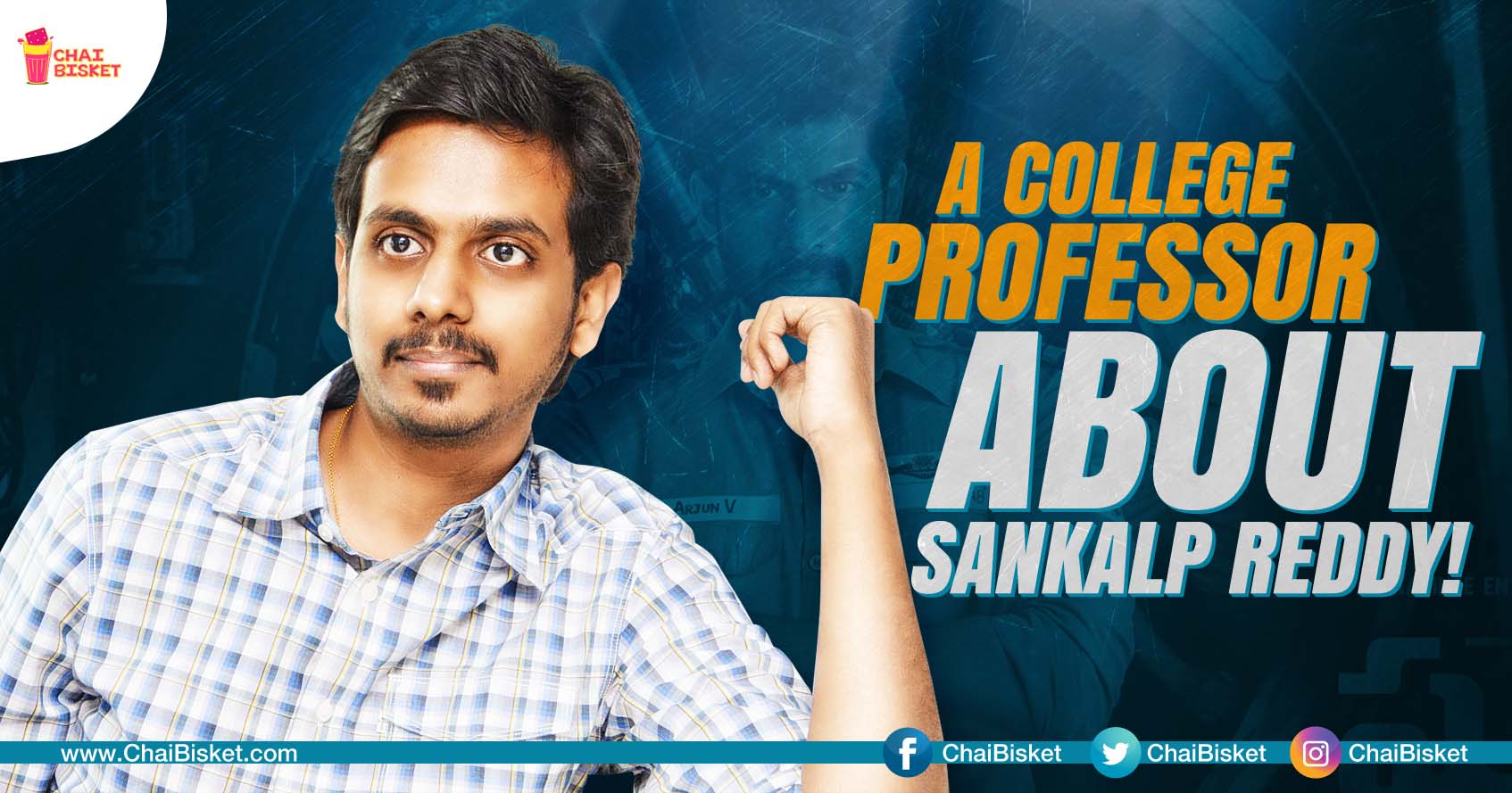 Musings Of A College Professor About His Former Student Sankalp Reddy, The Director Of Ghazi!