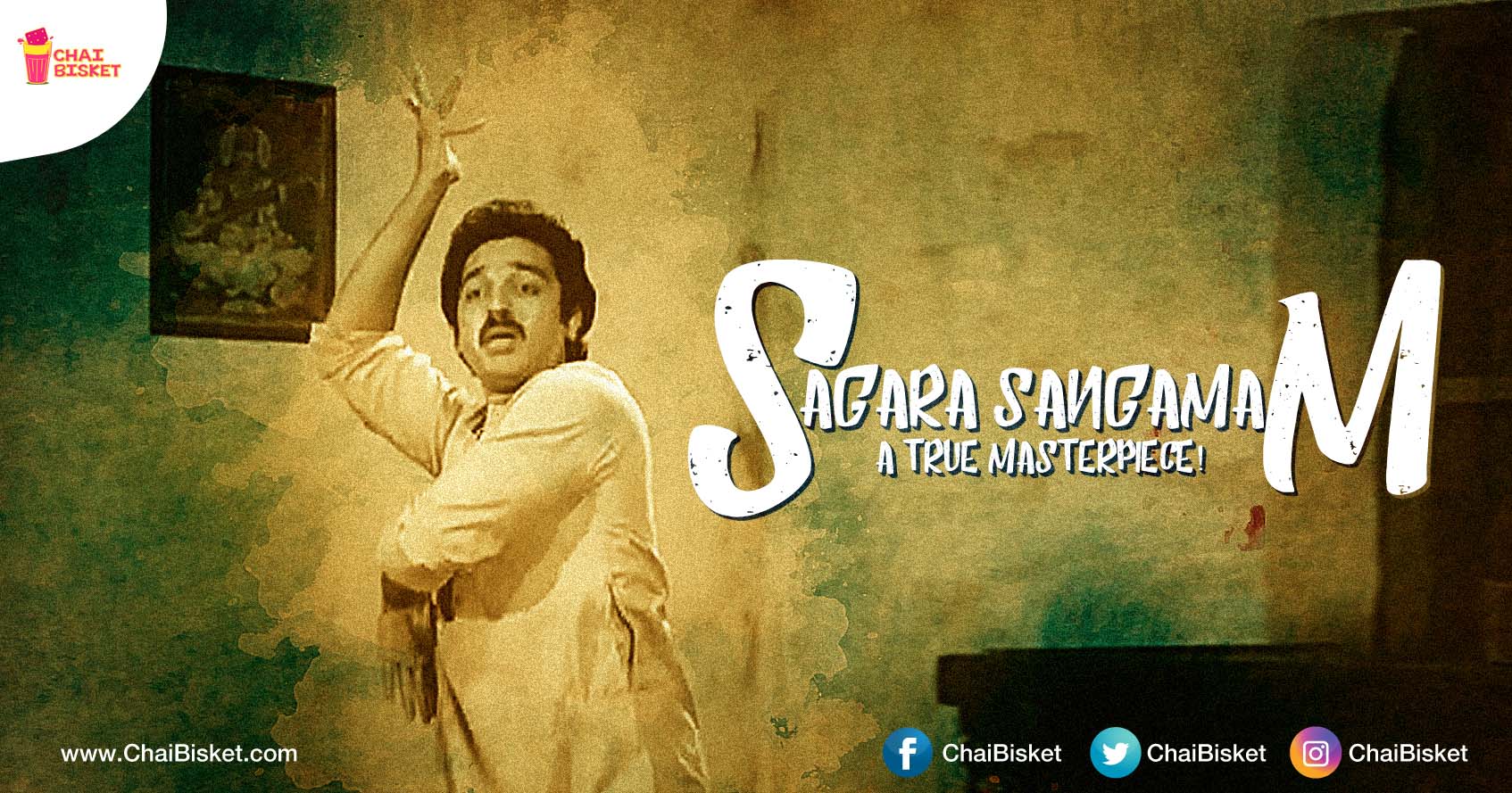 When you sit on the shore and look into the deep ocean, what do you feel? I personally find it so overwhelming. After a point, if it inspires you, you try to extract that inspiration from it. But, no matter how much you try, there is so much inspiration left in the vast ocean. It is the same with Sagara Sangamam. No matter how much I try to learn from it, there is still so much left in this Sagaram.

To tell the story of an unsuccessful person, how do you introduce that guy? Have a look at this introduction shot of Balu.

Balu tries to push the same rickshaw he paid for to reach his destination. Actually, that shot alone is enough for us to understand the irony of his life. But no. K. Vishwanath has other high-impact plans. Take a look at this.

He gets down of the rickshaw and seriously tries to get on the stairs. Now, that rickshaw guy calls him and throws the footwear of Balu on him. That absolutely indicates two things. Going with the nature of footwear, his pennyless situation is understood and them being fallen on him indicates the failed artist we’re about to witness. Like seriously, how can anyone establish a failed artist better than this? Genius introduction.

When we come to the screenplay, it is very sophisticated. Take this scene for instance. When Balu’s mother comes to the city on her work and also to meet Balu, she will not make it to meet him. Only in the railway station and when the train is about to start, Balu turns up with a bunch of banana’s to give her. Train starts and they just exchange normal chat and she gives him 25 rupees so that he can buy something to him. But, he returns it by kind of chasing the train through the window.

I think this one scene has established the relation of Balu and his mother throughout the movie. Because, take a look at this scene where his mother dies. The last thing she does is, asking Jayaprada to hand him over the money she saved for her funeral so that Balu wouldn’t go through a lot of struggle to bury her. Now, though Balu wants to return the money, he cannot. Because, it is not the train that is moving on, but her life.

Even the way that scene is presented has a lot of poetry in it. He basically dances in front of Goddess Saraswathi and her dying mother. Since Balu is a dancer, when she dies, Balu holds her legs (he could’ve held her body into his hands. But no) and cries. If we pause the frame, we can clearly see the emptiness that is created through her death in his life. There is an empty plate in the foreground. Emptiness amplified through visual. More than anything else, K. Vishwanath is a genius in framing. Pause at any moment in his films, he’ll stun you with his artistry.

To tell you some more stunning things I’ve noticed in this film, take this character Madhavi. Madhavi is the love of Balu’s life. Where did they first meet? Take a look.

In a temple. Not just that, whenever Madhavi’s character is about to take an important turn with respect to Balu, their meeting is in a temple. Even their duet, Mounamelanoyi starts off in a temple. Just look at these images and think about the reason for it.

I think, it is very simple. To Balu, Madhavi is divine. Her love is divine. It is as divine as his art. Instead of saying it verbally, he told that visually. That is how cinema works. Talk through the visuals. For dumb people like us, that is told verbally too. In the end, when Balu is on stage, he refers to Madhavi as ‘Na Devatha’. Watch it.

Let me talk about another intelligent way of story telling that is used predominantly in Sagara Sangamam. It is through properties. Sometimes they act as metaphors and sometimes they exist to amplify the impact of a scene. Take wind chimes for instance. After the marriage proposal by Balu came into the picture, it starts to appear. When Balu visits her place, their conversation happens around it. What does that signify? Think about it.

Now, comes the legendary song Takita Thadimi. I know this thing will get lengthy if I talk about this beautiful piece of art. But I can’t resist. After watching it for so many times, I somehow realized that, this song alone tells the entire story of Sagara Sangamam. Yes. Let me tell you how. Just before the song begins, Balu walks in drunk. He takes a puff and puts off his cigarette. It hurts his legs because of the hole in his footwear. (We may have forgotten about the condition of his footwear that was shown in the beginning of the movie, but not KV)

Sivayya is sent by Madhavi to make Balu stop. But, he will not listen to him. He starts off the song by worshiping the bottle.

Now, he dances on the floor first, gets on to the circumference of the well next.

Finally on to the thin rods that separates the well in to two.

My point here is, what did he convey by setting up dance on a well? I think that poetically indicates the life of Balu. Just think in this way. Balu is a failed dancer. He gets addicted to alcohol. Alcohol puts his life in risk. It gets worse day by day. This entire thing is shown by dancing on the well. He used to be normal on floor. Gets on to the risky circumference. Then on to much more riskier part, the rod.

But, as soon as Madhavi offers him a hand, he leaves the alcohol. (Alcohol here doesn’t literally mean alcohol, it means his dull life or dissatisfied lifestyle etc) To convey that, just look at the way this song ends. He focuses on the left over bottle. If a filmmaker is able to convey the entire story in mere 5mins and audience couldn’t get it, then audience should definitely raise their standards rather than filmmaker lowering his standards. Here, I don’t want to discuss the way that song was shot or the techniques used to amplify the impact because, that will make this article even more lengthy.

**Take a look at these two photos. In both of them, Madhavi wants to save Balu. Got my point?**

Infact, if we consider the travel undertaken by Balu’s character, it will always reach a peak and we never notice it. Whenever it reaches that peak, something or the other pulls him down and every time he falls down, it is his art that keeps him alive and nothing else.

So, in the end, Balu wants his art, his legacy, to be carried on by Madhavi’s daughter and agrees to prepare her for the final performance. Then comes the song Vedam. That song can still give goosebumps to me. Because, the way sound is concieved in that song and picturisation is brilliantly artistic. Just to mark an instance, have a look at this visual. Song is on a high pitch and suddenly it stops on Balu’s blood. Camera zooms in onto his blood and the sound that is placed over that visual is audience claps.

That brilliantly tells us the entire emotion of that situation. When I thought about it, I somehow felt that, his death is their entertainment. To tell that in another way, it also means, being an artist, you may even have to die to keep your art alive. When Balu dies eventually, there is a shot for exactly 7 secs. That one shot alone speaks millions of words. It is so simple. Balu’s dead body is on a wheelchair (foreground) and there are Sailaja’s legs dancing in the background. It appears as if Balu’s dead body now has his student’s legs. What a poetic way of ending a character.

And the movie ends with an iconic K. Viswanath long shot.

I’m conciously avoiding to talk about Kamal Hassan because, I genuinely feel that I’m not at all qualified enough to even appreciate his talent. He is beyond my satisfaction.

So, I restrict myself with this much. I remind you once again about this. All these things I mentioned over here are just a drop in this Sagaram. Sometime later, when I gain more experience and knowledge, I’ll try to appreciate this master-piece again. 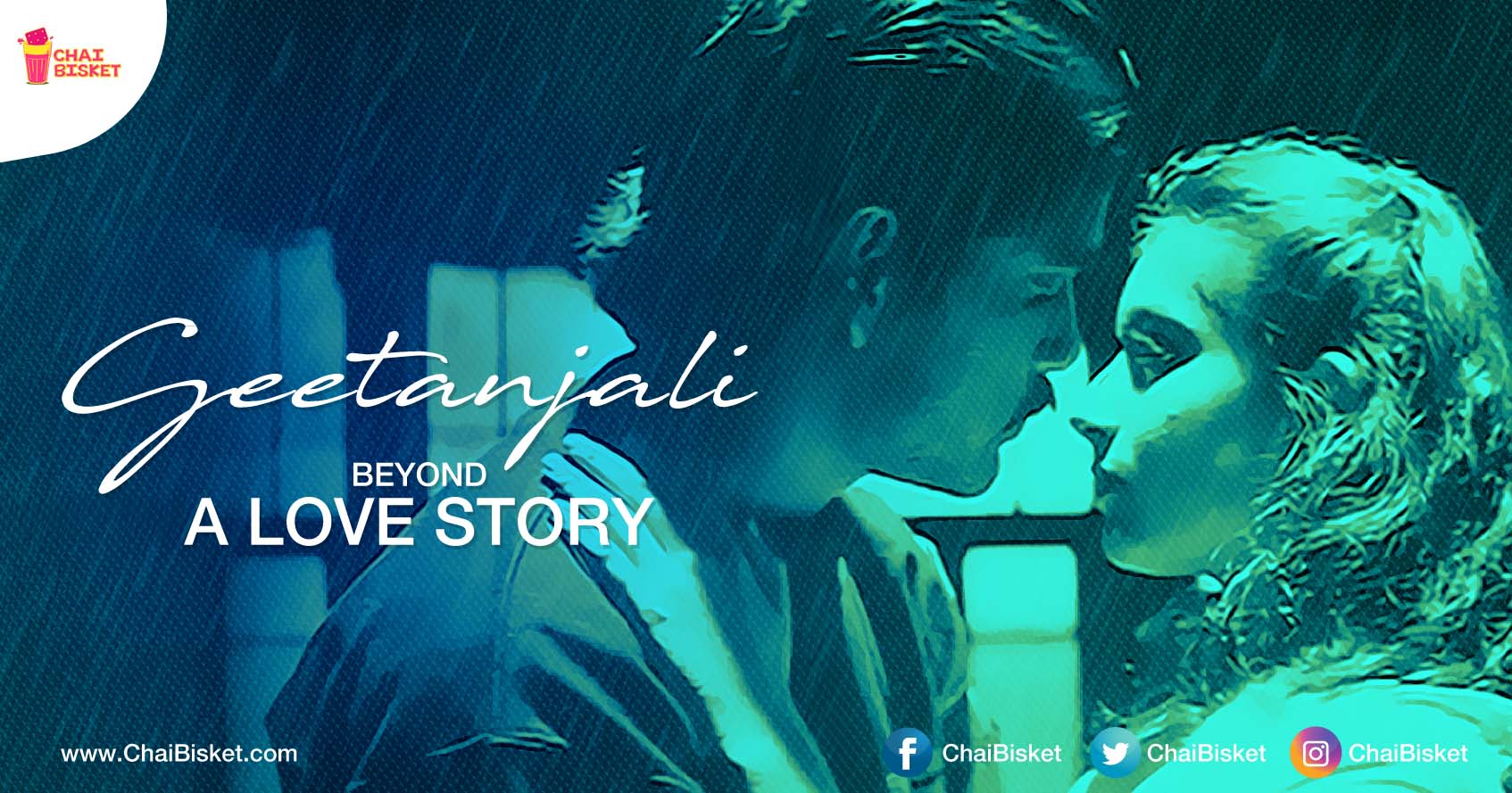 Here’s Why No Other Love Story Can Be As Good As Mani Ratnam’s Classic Geetanjali!