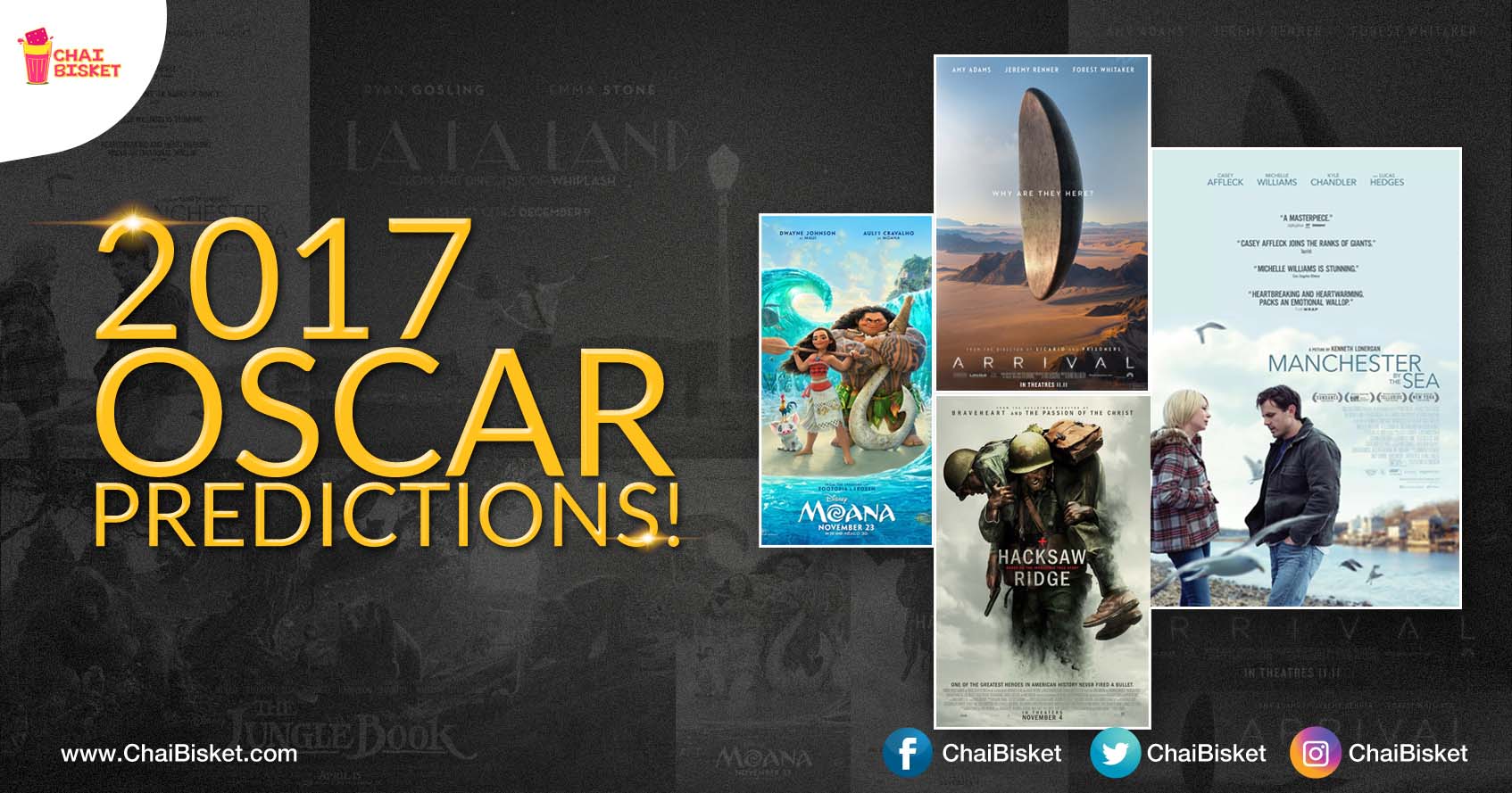 Trying to predict Oscar winners… must say, it is difficult. The Academy is maintaining consistency since decades, but the one thing that repeats every time is that the obvious choice doesn’t always win. At the same time, my instinct is to choose “who I want to win”, and not “who will win”.

The thing is, who wins and who loses doesn’t necessarily mean anything. The Social Network and Inception lost Best Picture to The King’s Speech, but who’s still talking about “The King’s Speech” today? So its not just about who is winning or who is losing.

The past year we some amazing films. Some of those films are centered on the lives of black people and some of those major artists are black, that’s a crazy moment to remember for this 89th Oscars. We have seen Some brilliant characters this year. Desmond Doss, such an inspiring character in Hacksaw Ridge, very moving character Saroo in Lion.

You’d actually probably do fine if you picked “La La Land” to win every category in which it has been nominated, but one film winning every award, that’s no fun right? So Lets go in to the categories and see what are the best picks for the 89th academy awards from my side and don’t forget to share what’s your picks.

Best Film:
Total 9 films competing for the statue in this category, ofcourse la la land is your obvious favorite, I know. Just because you love La La Land don’t underestimate Manchester By The Sea, Moonlight and Lion in this bag. Totally beautiful films they all are. If Lion is filled with emotions, Manchester By The Sea is filled with tears. La La Land is a film that celebrates dreamers and Hollywood itself, we have seen some wins in the past as well “The Artist, Birdman, and Argo” having the same lines, each films origin belongs to Hollywood, so I predict that La La Land is the winner.

What Will Win: La La Land
What Should Win: Manchester By The Sea

Best Actor:
I just have one name for this category, and it is Casey Affleck for Manchester By The Sea. However, he is in the headlines from the last couple of months for all the wrong reasons, sexual harassment allegations against him have dimmed his stardom at least a bit, making him less of a sure thing than he seemed a few months back. Votes will definitely be affected in this category. Have to see how voters will react to his off-screen image with the exceptional on-screen performance. In any case if it is not Casey Affleck, it will surely be two time Oscar winner Denzel Washington whose performance in Fences absolutely nails the audience to the wall. He is even the director of this film. Of course Hacksaw Ridge is also good, but I felt it was more an inspiring character than a performance oriented subject. Desomd Doss we still respect you.

Who will win: Denzel Washington
Who Should win: casey Affleck

Best Actress:
Although Natalie Portman is my personal favorite, I think Emma stone will grab it for La la land. Since Amy Adams was not even nominated for her role in Arrival, it will be an easy choice I think.

Best Director:
Of course Damien Chazelle is a hot favourite for La la land. He made La La Land as a love letter to Hollywood musicals and also depicting the crushing reality of life. But going by the past few year winners list, a film never got the best picture and best director award for the same film. So if la la land doesn’t get the best film award, best director will be Damien Chazelle. If it does bag the best picture then it will be Barry Jenkins for Moonlight. If Chazelle does actually make it, he will be the youngest director to get the Oscar.

Who will win: Damien Chazelle for La la land
Who Should win: Barry Jenkins for MoonLight

Best Cinematographer:
Without any doubt, this will be the toughest category for this year’s jury. La la land is filled with superb Long takes, Arrival is strikingly naturalistic, the artistic Dark shadows composition and the way the space craft is shown and the scale in composition is something brilliant. The best possible steady cam shots and the intimacy in “Moonlight”. The masterful composition of “Silence”. The impressively dynamic compositions of Lion with those sky shots in the beginning, have to see which of these stellar efforts eventually bags it. Personally, I’m thinking Linus Sandgren will get it, but you cannot ignore Greig Fraser.

Who will win: Linus Sandgren for La la land
Who Should win: Bradford Young’s for Arrival

Best Animation Film:
Have to agree, unlike last year’s “Inside out”, there are not many best animation films this year. Looking at the list Zootopia is definitely the front runner but Moana should get it for its brilliant story telling and the added flavor of evolution of mankind in the film. Must say the songs in the film are an added bonus.

Who will win: Zootopia
Who Should win: Moana

Best Foreign language film:
The category every outsider waits for. Whoever thought that it will be Handmaiden, shockingly the Handmaiden was not even submitted for the nominations. Logically, The Salesman wins in any sort of vote. The Iranian filmmaker Asghar Farhadi made it clear that he won’t be attending the Oscar ceremony in protest of Donald Trump’s Muslim ban. So it is possible that Academy voters might feel compelled to make a statement here by giving Farhadi’s absence the spotlight and shift focus to the topic. If not, the better choice would be the German comedy Toni Erdmann, which is the most talked film since its release.

Who will win: The salesman
Who Should win: Toni Erdmann

Best Actor in supporting Role:
This is very close competition between Lion and Moonlight, both of them left their mark in a big way. The big question is, can the Slumdog win big this time?

Who will win: Mahershala Ali – Moonlight
Who Should win: Dev Patel – Lion

Best Actress in supporting Role:
Surprisingly Taraji Henson didn’t get a Best Actress nomination for “Hidden Figures”, Michelle Williams is there in the list but she is there for only a few minutes in ““Manchester by the sea””, so the easiest guess will be 3 time nominee “Viola Davis” for “Fences”.

Best Original Screenplay:
Obviously the best picture winner will get the best screenplay award too, so the obvious choice will be “La la land”. Although La La Land is a terrific movie, it could not have been easy to write screenplay for Manchester by the sea.

Who will win: La la land
Who Should win: “Manchester by the sea”

Best Adapted Screenplay:
My heart goes out to Saroo’s life journey in “Lion”, but its my personal choice. As an Indian we may be biased towards lion but maybe it will be Moonlight that gets the nod.

Who will win: Moonlight
Who Should win: Lion

Best Editing:
Previous wins “Mad Max: Fury Road, Whiplash, and The Girl with the Dragon Tattoo” signal a winner in this category. It looks like the action-heavy editing of “Hacksaw Ridge” could take this. but “Hacksaw” doesn’t have the striking quality that “Mad Max and Whiplash” had, So I’m going with La la land as editing is the key to that film’s tight narrative. I should mention here that those jerk cuts in Moonlight also make it a proper competitor for this category.

Who will win: la la land
Who Should win: Hacksaw ridge

Best Visual effects:
The Star Wars films are nominated this year. But “Jungle book” is the obvious choice for this.

The guttural and slightly terrifying soundscape of “Arrival” seems like an easy win. The new sounds for aliens, feels fantastic. However, this award has gone to action-heavy films in recent years, so it is also possible that it will go to Hacksaw Ridge. Especially in the war scenes, the film scores the maximum points.

Who will win: Arrival
Who Should win: Hacksaw ridge

Best Sound Mixing:
Again it is a tough fight between Hacksaw ridge and la la land.

Who will win: la la land
Who Should win: Hacksaw ridge

Best Original song:
This one goes to La La Land but not for the audition song, I choose “city of stars” but “How far I will go” song has been haunting me since I watched Moana.

Who will win: La la land
Who Should win: Moana 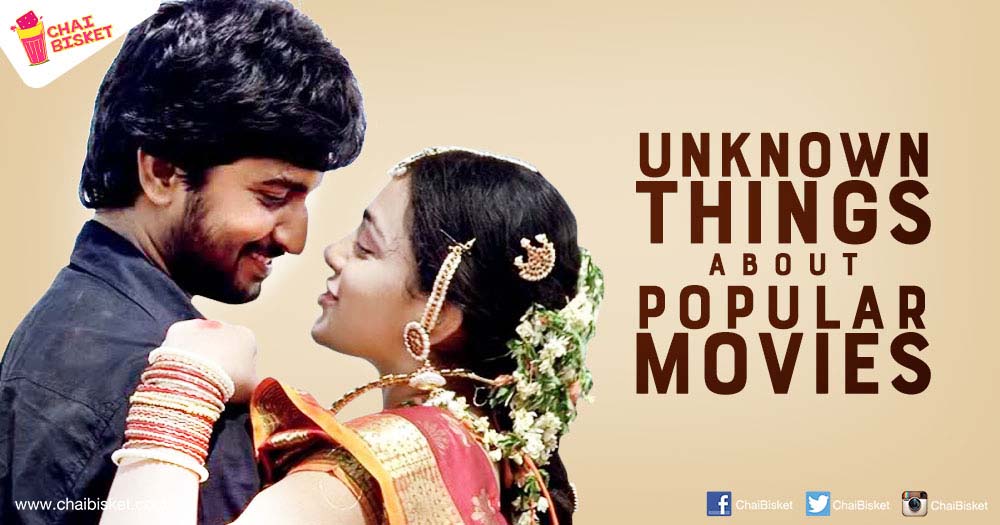 16 Lesser Known Facts About Popular Movies That Will Surely Amaze You!