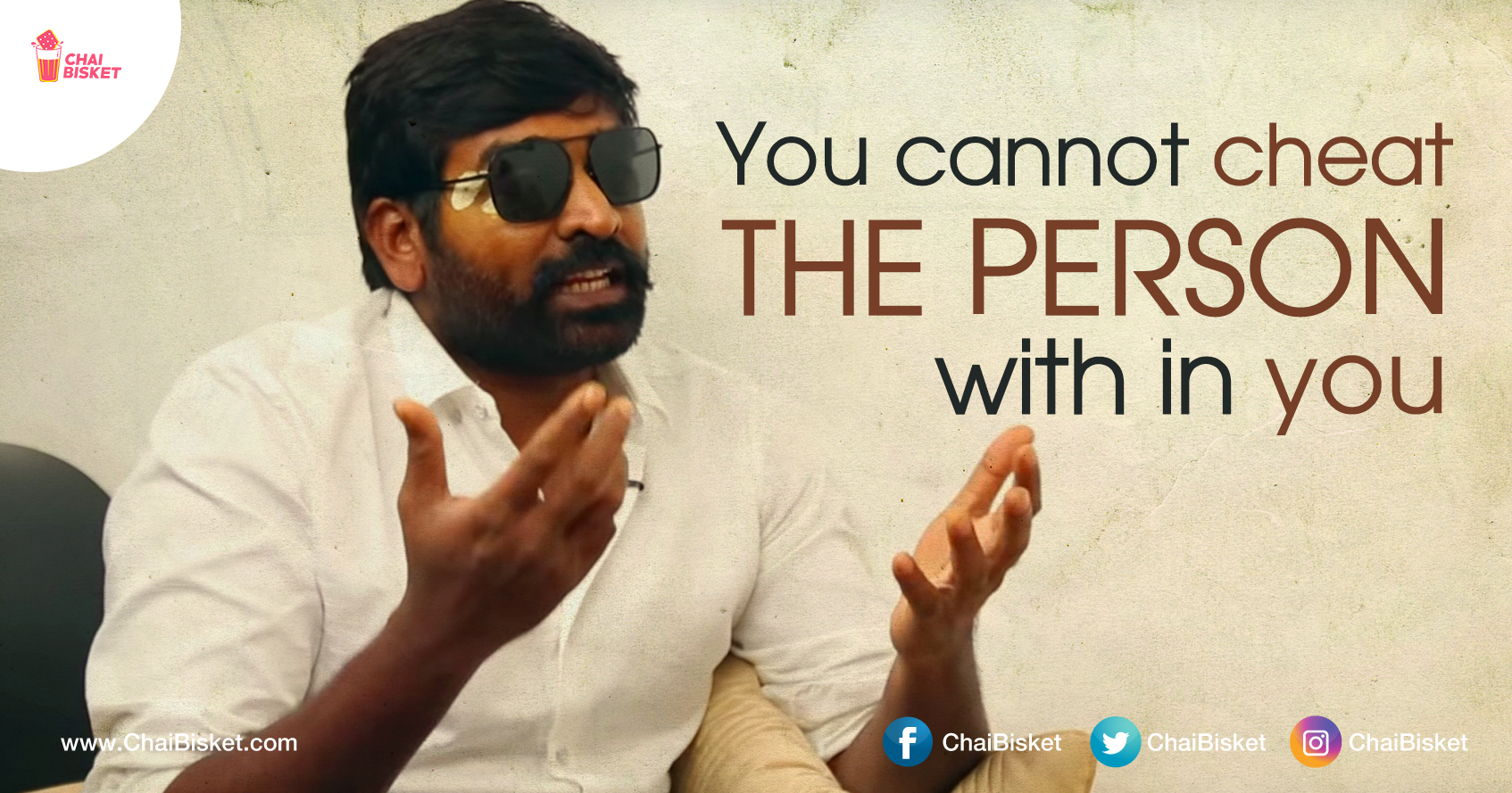 This name reminds us of the roles he breathed life into, and the ever-lasting impressions those characters left on us. He often leaves audience in awe not only by his way of portraying the characters, but also by his selection of movies.
Can someone imagine, that an actor who did the role of a soft natured travel photographer in 96, would pull of a transgender role in “Super Deluxe” ? This guy Vijay Sethupathi did it and that too with super ease.

He shared his philosophy towards life and cinema, his method of acting and the experiences he had as an actor in an interview by FilmCompanion with Bharadwaj Rangan as interviewer. Though this video is a bit old, it can undoubtedly be considered as a sacred book for movie aspirants and worth-a-watch for all the movie lovers.

Note that the interview is in Tamil

So, We’ve highlighted the important and interesting parts from the interview:

Before answering to interviewer’s question, Vijay explains that he was wearing Sun Glasses just because of the sun boils on his eye.
It would have been ok even if he did not say this to the audience. But this gesture shows his strong intention of not giving even a slightest impression of he being arrogant. Kudos to his humbleness ..!!

Vijay explains how he got into the character of Shilpa of “Super Deluxe”.
Note: If you haven’t watched “Super Deluxe” movie yet, please do yourself a favour by watching it as early as possible. It is available on Netflix.

Vijay says that the characters he play interact with him. Generally if someone wants to enact a character and if the actor deeply analyses the possible psychology of that character (which Vijay refers to at 5:43, that he actually tries to catch the soul of the character that he performs), then the actor himself knows whether he did justice to it or not. May be Vijay was referring to that conscience which tells “No, this not the way the character behaves” when the actor deviates from the character.

Vijay Sethupathi talks on ego here. He says that identifying and understandng our ego is very important. He also says that, instead of just focussing on showing your ego, anger and proving yourself to one single person, show your ego in accomplishing your work. Then your work will take you to higher positions and that single person whom you wanted to show your ego will not even appear in your sight and that person becomes one among many people.

This philosophy of Vijay Sethupathi can be considered as an excellent one. First of all understanding our own emotions like ego, anger etc., can help us apply them wisely in a conscious manner. There can be many people who say to us that we are not capable of something. Then, instead of just showing anger on them and focussing on proving to those people, if we can show our ego in winning over ourselves everytime and in accomplishing our work in better way everytime, then we can actually grow and the person who criticized us may become insignificant to us as our improvised work takes us to better heights both professionally and personally. Also in this way, our ego gets converted into positive energy of making ourselves better constantly.
You can observe that the interviewer asks Vijay about how he has got all this philosophy. This question seems to be not a planned one and shows how much the interviewer himself got astonished after listening to Vijay’s words.

Vijay talks on how he cares about the scene of the film instead of getting frustrated on other actors if they take more takes.
He also says that the face value of an actor is just for first fifteen minutes of the screen appearance.

We often see cases of movies of bigger stars
not doing well at box office. This can be a perfect example of Vijay’s words that the face value of an actor is just for fifteen minutes and later it is the story and the collaborative effect of all the people which leads to movie’s success.

Vijay talks on how he makes his co-actors comfortable and the importance of such things for the movie on the whole.

This shows that this guy does not gets carried away by his position as a hero. He loves and respects the art and makes everyone give their best for the art form to triumph.

There are many other aspects which Vijay Sethupathi has discussed and the full video can be found here.

The greatest achievement of actors is when people call them with the names of the roles they portrayed..!!
In this interview, Vijay Sethupathi spoke about an incident where a girl saw him in Hyderabad and said
“I met Ram here .. I met Ram here”, with her friend on phone. I am sure that many of you who are reading this would have already recognized that Ram is the character played by Vijay in 96. That is the sort of impact this guy creates.

After watching this interview, I felt that Vijay’s philosophy is not only limited to cinema but also applies to all our professional and personal lives.
Focussing on working better instead of spontaneously reacting to an insult against us, respecting people around us irrespective of what the work they do and thinking about the bigger picture on the whole are some of the things which can be applied to all our lives to become better humans.

Note that all my interpretations of the actual interview stated above are my personal opinions and may not hold true for all .. Thank you ..!! 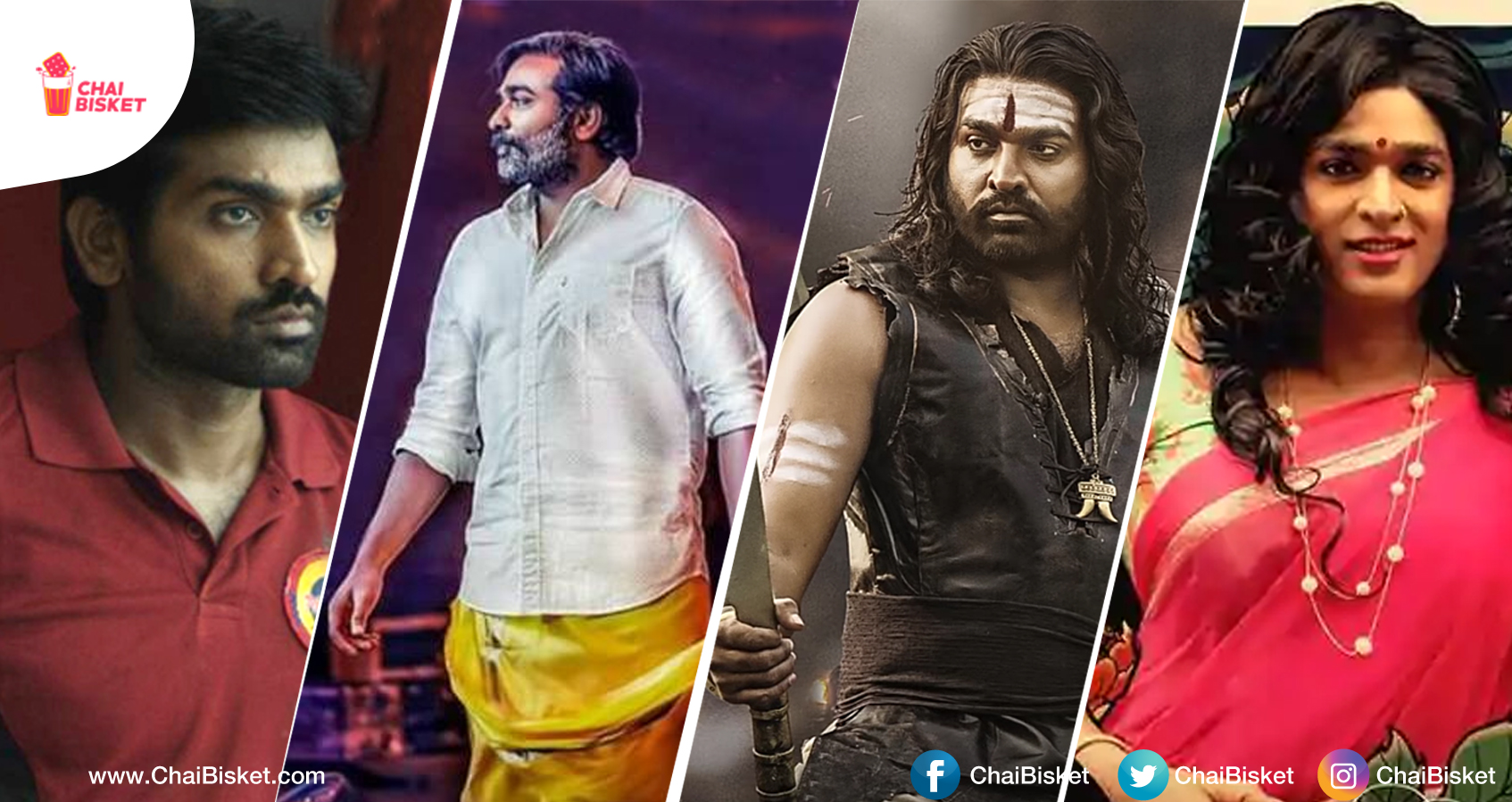